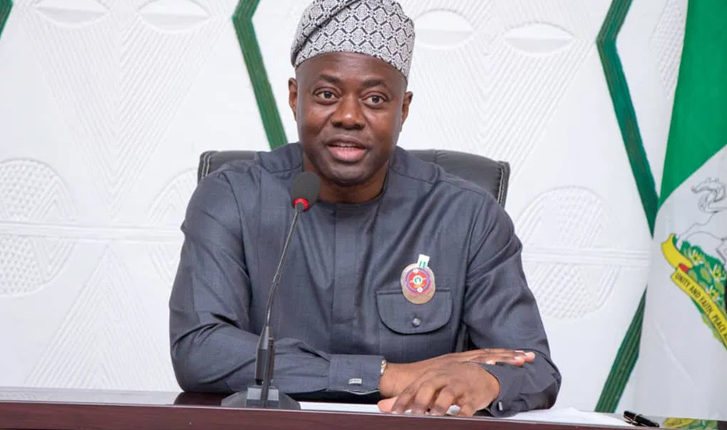 Oyo State Governor, Seyi Makinde, has said that he would not accept the Chairmanship of the PDP Governors Forum because he is fighting for issues that are foundational to the peace and unity of Nigeria. Makinde said this on Friday in Aba, Abia State, while commissioning the newly constructed Nwaobasi Estate Road and the Osaa Okea – Umuakatawom Road.

The Oyo Governor explained that the PDP could not claim it wanted to restructure Nigeria if it is not ready to restructure itself first. He said that he and Governor Okezie Ikpeazu of Abia State and others are not fighting for Southern Nigeria to have the chairmanship of the PDP Governorship Forum, but for things that will unify the country. Makinde lamented that the country has been practicing democracy for 23 years, but that it is yet to take a path that could lead to sustainable development.

“I read on the internet that Seyi Makinde has been appointed the Chairman of the PDP Governors’ Forum. It is a lie from the pit of hell. Even if they give it to me, I will not accept it because there must be an order. Ikpeazu is the deputy chairman of the PDP Governors’ Forum. “If the chairman resigns, the deputy chairman will take over the position. This is how to have an order in the process. And this is not what we are fighting for.

“We are not fighting for the Southern part of this country to have the chairmanship of the PDP Governors’ Forum. We are saying that if the PDP has promised to restructure Nigeria and we can’t restructure the party, then we are not ready to restructure Nigeria. “There are issues that are foundational. If you read the proceedings of the constitutional conferences that led to independence, you will know that there were issues. And since 1960, we have not been able to get things right. “They said that military interregnum and their command structure affected us, but we have been practising democracy for 23 years now and we have not been able to take a path that can lead to sustainable development. This is what we are saying,” he said. He commended Ikpeazu for improving the road infrastructure to boost commercial activities in the city and called on the federal government to give more powers to the states to fix federal roads in their areas.