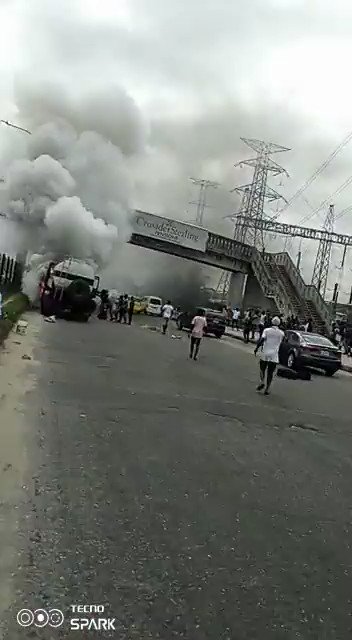 There was palpable tension on Wednesday morning when a diesel tanker burst into flames along the Lekki-Epe expressway, at Jakande inward Chisco, in Lagos State.

According to reports that the incident occurred at about 9a.m as motorists were advised to approach the area with caution and maintain situational awareness.

It was gathered that the backlog of traffic, resulting in gridlock, has gone beyond Tipper Garage at the time of filing this report.

– @followlastma: As of now, Effort has being put in place to stop the fire. We will bring you more updates as it unfolds https://t.co/eMgPIjNfRZ pic.twitter.com/sVng0px7Cg

Meanwhile, the Lagos State Traffic Management Authority (LASTMA), giving an update on the incident, confirmed that the fire has been put off.

“The fire has been put off but they are presently waiting for a towing vehicle to get the tanker off the road. We implore you to drive cautiously on this route,” LASTMA stated.

JUST IN: Alleged Plans To Get Rid Of Tinubu, Install Kashim Shettima As Nigeria’s Next President Emerges

THE UNIQUENESS OF MAZI CHIBUIKE JONAS