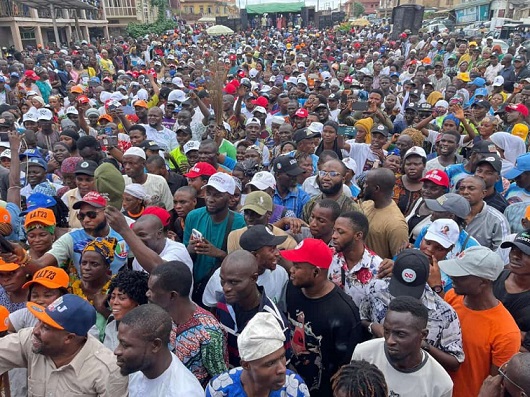 Thugs allegedly working for the Chairman of the Motor Park Management System in Oyo state, Lamidi Mukaila, popularly called Auxiliary have attacked members of the All Progressives Congress in the state.

Reacting to the attack, the governorship candidate of APC, Teslim Folarin described the incident as the height of lawlessness, brigandage and provocation capable of heightening tension in the state.

He said it happened while members of the party were campaigning for its presidential candidate, Bola Tinubu and his running mate, Kashim Shettima.

SaharaReporters learnt that scores of people were injured when the thugs in a light green SUV along with about 10 other vehicles intercepted the APC members at Labiran junction in the heart of the city around 1:20 pm on Tuesday.

Folarin said despite several warnings by members of his party to ensure the governor of the state, Seyi Makinde tame Auxiliary and his agents, he was hellbent on fomenting troubles.

The senator in a statement said he was surprised that the PMS boss could attack his supporters.

The statement reads in part, “I’ve just been informed that Makinde’s thugs led by notorious Lamidi Auxiliary have launched coordinated attacks on our APC members and support groups.

“Auxiliary personally led the attacks at Iyana Labiran enroute Oje in Ibadan. As peaceful and law-abiding citizens, we won’t take laws into our hands. To this end, I call on law enforcement agencies to do the needful.

“Not minding the deadly attacks on our members by Makinde’s agents of darkness, we’re continuing our walk for Asiwaju Bola Ahmed Tinubu/Kashim Shettima. The injured members are receiving treatments at an undisclosed hospital.”