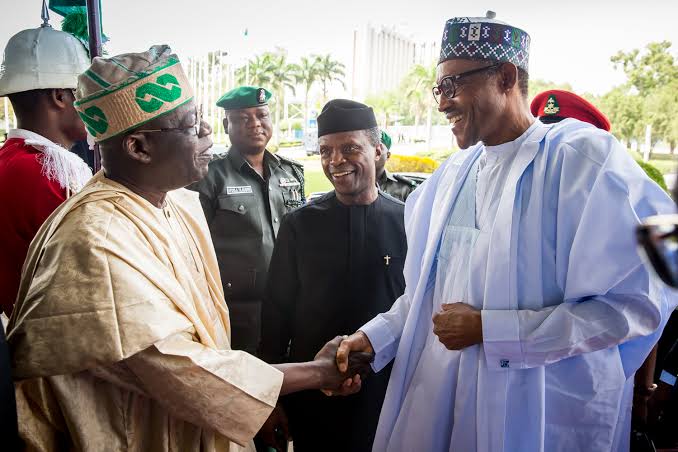 A week after the Director-General, Tinubu Support Groups and former House of Representatives member, Abdulmumin Jibrin, disclosed that former Lagos State governor and National Leader of the All Progressives Congress (APC), Asiwaju Bola Tinubu, will be contesting in the 2023 Presidential election, The Guardian gathered last night that he had informed President Muhammadu Buhari of his aspiration, to which the President reportedly asked him to go ahead.

This is coming as governors of the ruling party gathered last night for a crucial meeting over the proposed February national convention of the party.

Also informed of Tinubu’s aspiration is the Vice President, Prof. Yemi Osinbajo. The duo was the cynosure of eyes as they met on Saturday in Azare, Bauchi State for the Minister of Education, Alhaji Adamu Adamu’s daughter’s wedding.

Osinbajo served as Commissioner for Justice and Attorney-General in Tinubu’s eight years administration as Lagos governor.

The duo also met on October 29 last year when the Vice President visited the APC leader in his Asokoro residence to empathise with him on his return from the United Kingdom after undergoing knee surgery.

Highly-placed sources said Asiwaju had used the occasion of the Vice President’s visit last October to intimate him of his ambition.

While it is not clear what Osinbajo’s response was, sources in the know have severally quoted the VP as saying he would not contest against Tinubu, his former boss, adding that Asiwaju remains his benefactor.

But other sources, however, noted that Osinbajo has always insisted that the APC leader has never told him he wanted to contest the 2023 election. This is in reference to the rumoured presidential ambition of the VP.

When contacted as to whether Tinubu and Osinbajo had spoken about the former’s ambition, Mr. Tunde Rahman, Media Adviser to the former Lagos governor refused to volunteer any comment. He said he would reach out to our correspondent shortly, but he was yet to do so as at the time of filing this report.

Reacting to the development, Mr. Laolu Akande, the Special Adviser to the Vice President, said he was not aware of such discussions.

“I don’t think you should support the flying of such dubious kites. But to answer your question, no. I am not aware of any such discussions to even begin with.”

JUST IN: Goodluck Jonathan’s Presidential Ambition In Crisis As APC Leaders Fail To Support Him