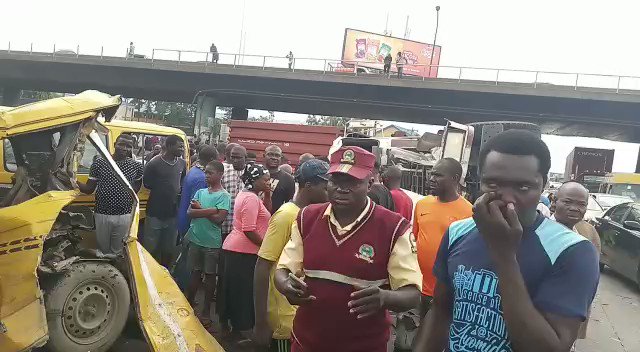 A six-year-old boy has been confirmed dead in the ghastly accident that occurred on Saturday morning at Iyana-Isolo under-bridge, Lagos State.

According to reports a father, his two children and other commuters were standing at the Iyana-Isolo bus stop waiting for a danfo bus to convey them to their destination when a container that was on speed lost control when a danfo bus drove in his front.

Speaking with an eyewitness, who sells drinks adjacent to the bus stop Mrs. Feyin narrated how the incident happened. “The container was on speed coming from Cele while the danfo bus was loading his passengers and immediately the danfo-driver drove in without checking his side mirror, the container driver lost control of his steering and the container tumbled while some commuters who were standing at the bus stop, fell on the gutter, and a six-year-old boy died at the spot. His sister and father sustained injuries and four vehicles were condemned

“We could not take pictures because everyone at the scene was weeping over the ugly incident, my brother, Baba Sewa who is one of the Agberos was the one who rescued some of the commuters and when he brought out the boy from the gutter he shook his head and said the boy is dead”.

Another eyewitness who was standing at the bus stop narrated how she, her husband, and her daughter narrowly escaped the fatal accident. According to her, “only one person was seen dead and the actual reason for this accident was a family of three who stopped a moving danfo bus while a container was on motion behind the danfo bus and could not control his speed when the danfo bus stopped to pick the family, it was in the process that the container hit the danfo bus that led to some of us sustaining this injury”

Speaking on the incident was the Isolo-police division who says the remaining commuters who sustained a severe injury, as well as both drivers, have been taken to the Isolo General Hospital for further treatment, and for now, only the boy has been confirmed dead.