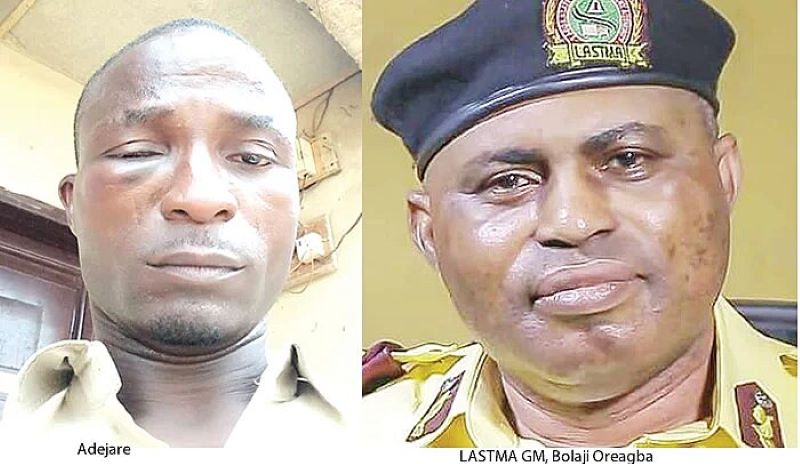 A commercial driver, Olasunkanmi Adejare, has accused the Lagos State Traffic Management Authority (LASTMA) of using thugs to beat him up and impound his vehicle in the Oshodi area of the Lagos.

Trixx NG learnt Adejare, who drove a minibus for commercial purposes on the Lagos Island, was said to have gone to the Ladipo area on April 12, 2021, to purchase some tyres for the vehicle when he was accosted by three hoodlums allegedly working for LASTMA around the Oshodi area when he parked his vehicle for a friend to alight.

According to PUNCH, the 44-year-old driver said the men demanded the key of his vehicle and when he refused to give them, they beat him up.

Adejare said the group drove the vehicle to the LASTMA office in Oshodi, adding that all efforts to retrieve the bus proved abortive.

He said, “I came with a friend to buy tyres for the vehicle at Ladipo and on our way back to Lagos Island around Oshodi, almost opposite the LASTMA headquarters, my friend said he wanted to urinate. There were many commercial buses picking passengers in that area, so I parked in front of those buses so my friend could alight from the vehicle.

“Immediately he opened the door and alighted, three men who were not in uniform came from nowhere and asked me to bring my bus key and I asked them why I should give them. Before I knew it, one of them was already inside the bus; another one was standing at the driver’s side door, while another one stood at the other side. They pounced on me and beat me mercilessly; they forcefully took the vehicle from me and drove it to the LASTMA office.

“When I confirmed that the vehicle was taken to the LASTMA office, I wrote a petition to the Permanent Secretary, Lagos State Ministry of Transportation, dated April 15 and it was acknowledged on April 21. I sought an investigation into the circumstances surrounding the forceful confiscation of the minibus when I did not violate any traffic law. The petition was referred to the DG of LASTMA, who also referred the matter to one Mr Apena, who is the director of surveillance and monitoring.

“When I got to his office and explained what happened, he supported those guys, saying that they were doing their job and I asked him that if they were working for LASTMA why were they not in uniform, but he could not give me an answer, and no investigation was conducted.”

Adejare said he wrote another petition to the commissioner of transportation on May 11, 2021, which was referred to the LASTMA GM, who in turn referred the petition to the director of legal service of the agency.

The victim, who noted that the director of legal service confirmed that the vehicle was parked in the LASTMA office, said he had been pushed over since May, as the officers refused to release his vehicle.

“Since that May till October, I have been going back and forth to LASTMA office and Alausa, Ikeja, without any meaningful result. I wrote a petition in October to the governor, but I did not hear anything about it. I realised that because I wrote petitions against them to the ministry that was why they did not want to release the vehicle.

“Since April 12, 2021, life has been unbearable for me because this minibus was given to me and others by the Lagos Island Local Government Area to ameliorate my suffering after I lost my job at Apapa due to COVID-19. I am also owing over N1.3m, while the bus is rotting away with everything inside it looted, including the four tyres and rim I bought at Ladipo Market.”

The LASTMA Public Relations Officer, Olumide Filade, said he was not aware of the matter and could not comment on it.

He said, “I don’t have any information whatsoever on it, so I cannot comment.”