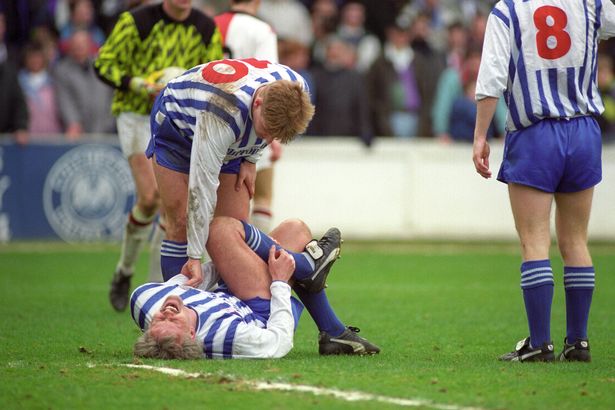 Britain’s dirtiest ever footballer bedded more than 400 women, headbutted opponents, picked up 22 red cards, and used to lick his moustache to see if he had got lucky the night before.

Roy McDonough may not be a name that rolls off the tongue for football fans, but he found himself in trouble with the authorities more than renowned hardmen such as Graeme Souness, Vinnie Jones and Roy Keane.

McDonough, now 62, used to drink 20 pints a night in his heyday and earned himself the nickname ‘Red Card Roy’ for his aggressive playing style.

His party trick was downing a pint of Guinness in less than seven seconds while standing on his head on a moving train.

McDonough made his name in the 80s and 90s as a lower league striker for the likes of Southend United and Colchester United, but he was more famous for his off the pitch antics.

He said he would sleep with a different woman every week and lived by the mottos: “Win or lose, on the booze,” and: “No f***er is going to outdrink me.”

In his revealing book, McDonough said: “It was a nickname I did my very best to live up to.”

During one 18-month period during his marriage to first wife Jackie, he reckons he bedded at least 39 girls, suffering from a curse of “failure to keep my trousers zipped up”. He says he inherited that from his dad.

McDonough said: “I’d patrol the club like a kid in a candy store, picking out whenever sweet little thing I fancied tasting, before ruthlessly moving in for the kill, telling them what we were going to do, and where we were going to do it.

“I’d say: ‘When we get in luv, I’m going to look after you downstairs, then all hell is going to break loose.’

“Alternatively, I could be really classy and ask: ‘So, how many times do you want to f*** tonight, darling?'”

When he was hungover, McDonough would give his “moustache a quick lick in the morning to find out if I’d done the deed”.

McDonough bagged 144 goals in 661 professional appearances, but it may have been even more if he could have controlled his temper better.

He admits he would “not make it past the warmup” in the modern game and received his first red card aged just 16 when he lifted a referee up by the throat in the Birmingham Schools’ Cup final.

It would see McDonough banned from football for six months, but there would be many more run-ins with the footballing authorities in an era when players could get away with almost anything.

He claims his violence was never pre-meditated, except when he sought revenge on fellow ex-footballer Tony Pulis for a previous disagreement with a kung fu kick to the head.

McDonough said: “I’ve been nutted, kicked up in the air, elbowed, spat at, but it was never a problem if defenders were up-front with you. It was the sneaky, cynical ones I didn’t like.

“The violence wasn’t pre-meditated, it was self-preservation. I never set out to hurt anyone, well only once.”

McDonough admits he spent most night “f***ed out of my brains”.

He often drove home blind drunk yet never had an accident and he was only once caught by police, for which he received a 30-month driving ban.

McDonough is now a business development manager living with his second wife Lizzie in Spain.

The sleeping around has stopped and by his own admission, he is much calmer these days.