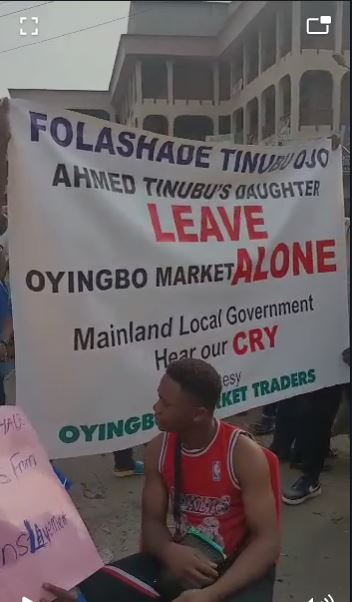 The Iyaloja General of Nigeria, Folasade Tinubu-Ojo has placed the Otto Modern Market, Oyingbo, Lagos State, on lock and key for the past two weeks.

Trixx NG learnt Folashade, who is the daughter of National Chairman of the All Progressives Congress (APC) Bola Tinubu, reportedly locked the gate to the plaza over complaints of trading in an untidy environment.

She further imposed a fine of N5million fine on the traders after giving two days’ ultimatum for the traders to clean up the premises of the market.

According to SaharaReporters, traders started protesting on Wednesday after forcefully entering the premises only to discover their goods have been rotten.

They were also protecting the continued insistence on the payment of the fine despite having done proper sanitation of the environment within two days.

One of the traders said that the aggrieved traders whose source of income and means of livelihood depend on proceeds from the market forced the gate open on Tuesday evening.

She, however, said they were pleading with Folashade to reopen the premises and allow for the continuation of trading activities while calling for the scrapping of the imposed N5million fine.

She said, “We are here in Otto modern market, Oyingbo. Our complex has been locked for over two weeks now. The Iyaloja, Folashade, Tinubu’s daughter came and locked it up since two Thursdays ago. She was demanding for N5million fine for leaving the environment dirty.

“This is a place where wholesalers sell foodstuffs, raw foodstuffs, perishable items, any type of foodstuff you’re looking for. All over Lagos, the Oyingbo market is known as a place where you can come and buy items and resell them at your price. This place is really populated, a lot of people trade here, they come from all over Lagos to come and make transactions.

“We were here when she (Folashade) came and locked up the premises with the claims that the environment is dirty and we were given two days ultimatum to clean up the environment which has been done.

“As we speak now, the DPO is here, a lot of people are here to take a view of the premises. The place has been cleaned up. The angry traders were forced to pull down the gate in the late hours of yesterday, that attracted a protest this morning because a lot of goods have been spoilt – Garri, potatoes, have been thrown out this morning.

“Whereas she is still bent on payment of the N5 million fine that if we don’t pay, this place will not be opened and a lot of people depend on the earnings from this place to feed their families, take care of themselves, some people who took loans are still paying, shops have been locked, a lot of customers have been frustrated.

“As a wholesaler, I have a lot of customers who depend on me but they have been disappointed for the past two weeks because I have no access to my own shop.

“People are here protesting seriously against the spoilt items and the N5million fine she is insisting we have to pay. We are going round the whole complex with the DPO right now. We are hoping that Folashade will give approval for the proper opening of the place because it was forcefully opened by angry traders.”

In videos shared with SaharaReporters, the traders, obviously affected by the barricade, took to the streets to call for the intervention of the local government so as to continue with their trading activities.