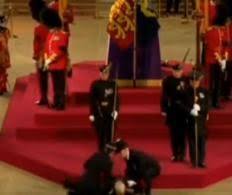 A British Royal Guard on duty for a 24-hour vigil following the death of Queen Elizabeth collapsed in front of the monarch’s coffin, with officials rushing to his aid as mourners gathered to mark the queen’s 70-year reign.

The incident occurred on the first night of the Queen’s lying in state, an event allowing the public to pay their respects to the late sovereign.

Standing just meters from the Queen’s coffin as she lay in repose at Westminster Hall early on Thursday, the guard was seen swaying uneasily before falling to the ground, prompting gasps from shocked onlookers.

Officials have so far offered no details on what caused the apparent fainting or the guard’s status, but local media outlets noted that paramedics attended to the man and brought him in for treatment.

Drawn from elite ceremonial units such as the Sovereign’s Bodyguard and the Household Division, the sentries are expected to remain completely still as they guard the Queen’s ornate casket, which tens of thousands of mourners have already come to visit. Though the troops rotate periodically, it is not entirely uncommon for guards to experience syncope, or fainting caused by poor blood circulation due to standing motionless for long periods.

After more than 70 years on the British throne – which now serves ceremonial functions and largely leaves governance to Parliament – Queen Elizabeth II passed away on September 8 of unspecified health complications.