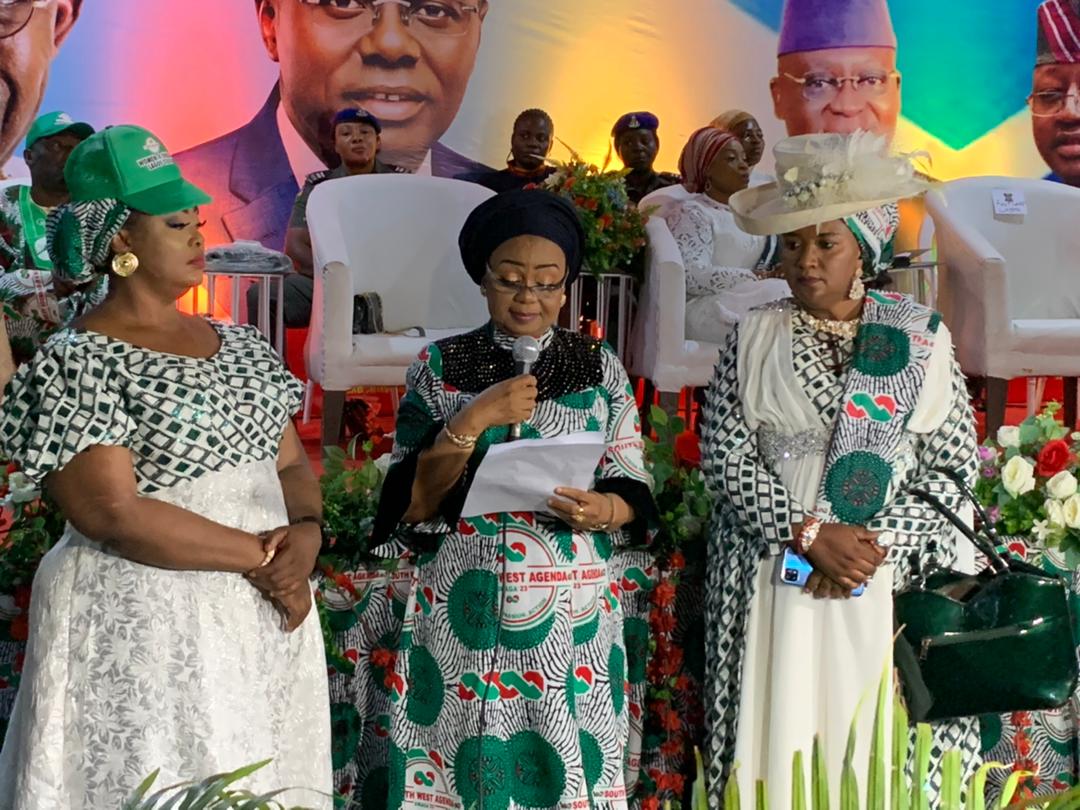 TRIXX NG reports that the women wing of the south west agenda (SWAGA) 2023 has launched in Lagos to canvass for the participation of women in politics and to also deliver more than 5 million votes for APC national leader and leading presidential aspirant, Asiwaju Bola Ahmed Tinubu in the forthcoming presidential elections.

The event was preceded by free medical Check and care for ailments such as, diabetes, high blood pressure, high cholesterol, malaria and provision of free eye glasses for reading and vision for those in need of them.

Welcoming the guests and delegates from Osun, Oyo, Ogun, Ondo and Lagos States, the Lagos State Chapter Chairperson Hon. Bolanle Akinyemi-Obe who was the immediate past Chairman of Coker-Aguda LCDA observed that the initiative of the free health care was to provide succor for those needing care, ease the rigor of seeking Medicare and call attention of individuals to the need to check up regularly and take health issues seriously.

The topic discussed at the event was titled ‘Role Of Women In Politics, Peace And Tranquility’, a theme that caught the attention of thousands of women at the venue as it was being dissected by the delectable Coordinator of women for SWAGA’23 Mrs Ayo Omidiran.

In her Key Note address on “The Role of Women in Politics, Peace and Tranquility”, Mrs Ayo Omidiran Re-emphasized the importance of women in politics, their role as mothers and their usefulness in mobilizing others for common good and purposes. She however lamented that despite the zeal of women and their enthusiasm for political involvement, not many women are currently involved in positions of authorities especially Executive and Legislative arms of Government even though efforts have started at party levels but there are lots more to be done in getting women elected into positions rather than making them second fiddles. This she said will improve the Nation’s peace, stability and tranquility.

The Chairman of SWAGA’23 in Lagos State, Hon. Monsuru Alao represented by Hon. Oloruntoba Oke welcomed all to the state of aquatic splendor and wish the gathering a fruitful outing while thanking the women for mobilizing support for Asiwaju Tinubu in his bid for presidency of Nigeria.

The Governor of Lagos State Mr. Babajide Sanwo-Olu who was represented at the occasion by Commissioner of Women Affairs and Poverty Alleviation Hon. Cecilia Bolaji Dada Thanked SWAGA’23 for their Commitment to the Asiwaju project 2023 and their support for his administration in Lagos State coupled with their impact in creating the necessary political awareness. He then wished all a good outing.

The Chairman of the group, Sen. Adedayo Adeyeye, said that the launch was another indication that Tinubu had gone ahead of other APC presidential aspirants, to win the party’s ticket on May 31.

The chairman, who commended women for their support for Tinubu, assured them that they would not regret when the former Lagos state governor emerged as the next president.

“With the event of today, we are signifying to other contestants that Asiwaju Bola Ahmed Tinubu has moved far ahead of every other person in the pack.

“We are ahead and we are happy they (other aspirants) are following us. At the end of the primaries, everybody should come together so that we can all work for the success of Tinubu.

“With women support and with the kind of things we have seen all around the country, I am absolutely confident and assured that Asiwaju will prevail not only in APC primaries but also in the general elections.

“He will be elected as the next president of the Federal Republic of Nigeria,”

He said that women’s demand for 35 per cent Affirmative Action would become a reality with Tinubu at the helm of affairs.

“I want to assure women that, given Tinubu’s antecedents, his presidency will be an era in which women folks in Nigeria will be at the fore front of governance in the country.

“They are going to be well represented in the government if Tinubu is elected president. Women will occupy a pride of place and be given their due. Happy days ahead for women in Nigeria’’

In her remarks, Her Excellency the First Lady of Lagos State Dr. Ibijoke Sanwo-Olu thanked the women for putting together the event of that magnitude with thousands in attendance and for the recognition accorded the awardees. She especially thanked SWAGA’23 for their support for “our father Asiwaju Bola Ahmed Tinubu in his presidential bid” and for the Second term bid of Mr. Governor Babajide Sanwo-Olu while praying for their success at the polls.

She admonished women to speak up and remain vocal in their quest to better the society.

The Executives of the Lagos Chapter of the group were thereafter inaugurated by the National Chairman of SWAGA’23 Sen. Dayo Adeyeye with Hon. Akinyemi-Obe as the Chairperson and Hajiya Fatima Bello as the Coordinator and Nikky Orisarayi as the Secretary.