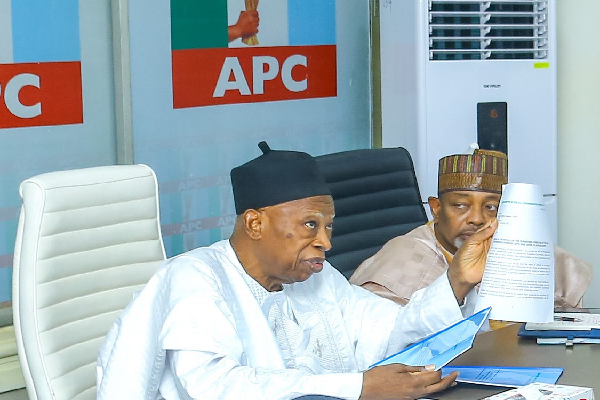 The All Progressives Congress (APC) has released nine guidelines for the conduct of presidential, governorship and parliamentary aspirants ahead of primaries.

The conditions are contained on page 17 of the nomination form given to the aspirants.

TRIXX NG learnt that of the nine conditions, most of the aspirants, especially presidential heavyweights, are uncomfortable with the “voluntary letter of withdrawal”, which they are expected to sign before a Commissioner for Oaths or a Notary Public.

They alleged that the withdrawal clause may lead to either imposition of a presidential candidate or abuse of the consensus clause in the Electoral Act 2022.

It was learnt that most presidential aspirants have been seeking legal advice on Page 18 of the nomination form, which they considered a booby trap.

A copy of the nomination form revealed the tough terms for aspirants who have paid humongous sums to participate in the primaries.

Although APC leadership claimed that the conditions were in line with Article 21. 2 (i — xii) of the APC Constitution, many aspirants faulted the conditions as inconsistent with fundamental human rights as enshrined in the 1999 Constitution.

The conditions according to The Nation are: “Abide to preserve, protect and defend the Constitution of the APC and the Federal Republic of Nigeria.

“Abide by the Primary election guidelines of APC and Nigerian Electoral Act.

“I, my primary campaign organisation and my supporters undertake to accept the outcome of the primary and support whoever emerges as APC candidate for the general election.

“Abide not to engage in dishonest practices, thuggery, being absent from meetings to which he/she is invited without reasonable cause; carrying out anti-party activities which tend to disrupt the peaceful, lawful and efficient organisation of the party or which are inconsistent with the aims and objectives of the party.

“Abide not to give wrong information to any organ of the party or unauthorised publicity of a party dispute without exhausting all avenues or settlement or redress within the party.

“Abide not to file any action in a court of law against the party or any of its officers on any matters relating to the discharge of the duties of the party without first exhausting all avenues for redress provided.

“Abide to always follow the path of justice, honesty and unity amongst fellow contestants and party members. So help me God.

“Abide not to factionalise or create a parallel congress, election, or party organ at any level.”

The aspirants, especially presidential contenders, have picked holes in Page 18 of the nomination form bordering on signing a voluntary letter of withdrawal before participating in the forthcoming exercise.

The letter, titled: Letter of Voluntary Withdrawal, says: “I…of the above address…vying for…hereby voluntarily withdraw my candidacy from the contest…scheduled to hold on…2023. My withdrawal is in the best interest of our great party, the APC.”

Apart from addressing the letter to the National Chairman of APC, Senator Abdullahi Adamu, each aspirant is expected to endorse the letter before a Commissioner for Oaths or Notary Public.

It was learnt that most aspirants were shocked by the attachment to the party’s nomination form.

It was learnt that some aspirants have opted for legal advice on whether or not to sign the letter of withdrawal.