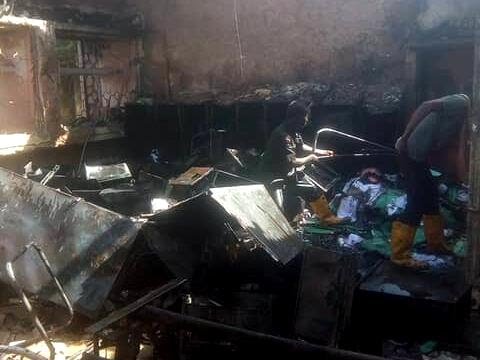 The Kano State Fire Service says it has put out the fire outbreak that razed five offices at the School of Science, Kano University of Science and Technology (KUST).

Trixx NG learnt that the fire was triggered off by an electrical spark.

In a statement issued to newsmen by the Public Relations Officer of the State Fire Service, Alhaji Saminu Abdullahi, said that all the five offices were completely razed down by the inferno.

“We received a distress call at our Wudil division from the security of the University at about 12:04 a.m. that there was a fire outbreak at a ground floor of the school.

“Upon receiving the information, we quickly sent a fire vehicle to the scene at about 12:07 a.m., to bring the situation under control,” the spokesperson for the state’s fire service, Saminu Abdullahi, said on Sunday.

He urged the general public to adopt extra care and precaution especially as they approached harmattan season.

Related Topics:Kano University of Science and Technology (KUST)
Up Next